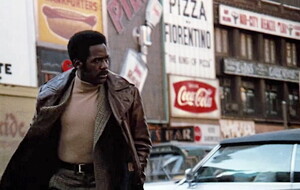 The 1971 crime film tore up the Hollywood rulebook

SHAFT must have seemed like it was cut from a seriously different kind of cultural cloth when it first hit cinema screens in 1971.

There's that supremely funky Oscar-winning soundtrack from Isaac Hayes for a start. From the very first moment we hear the waft of guitar channelled through an over-worked wah-wah pedal and Isaac, the shaven-headed sultan of soul himself, warbles that immortal opening line "Who's the black private dick who's a sex machine to all the chicks?", it's clear this is not going to be your standard American crime film.

Freshly re-issued by Criterion DVD, this is a movie with considerable cultural clout and one that proved to be a genuine game-changer. The plot, which essentially involves a private investigator called John Shaft being hired by a Harlem mobster to help locate his kidnapped daughter, may be bog standard, but the fact that Shaft is an African American facing off against the racist authorities while cruising the mean streets of the Ghetto at the same time is practically revolutionary.

If you think that black leading men and A-list stars are still relatively thin on the ground in 2022, imagine how rare they were in 1971. In Richard Roundtree, director Gordon Parks delivered a black superstar for the whole movie-going world to bow down before. As Shaft, he swaggers to stunning effect as a cool, gun-toting ladies man in the funkiest threads imaginable – nobody but nobody can carry off a full length leather trench coat like Roundtree does here – taking on The Man while bedding as many ladies as possible along the way.

Odd as it may seem, his supercool creation changed the way Hollywood tackled race forever. As basic and broadly drawn as his character was, it also seemed to strike a chord with a nation grappling with the concept of black empowerment and while better big screen moments would come with time, Roundtree's performance and the simple tale that Parks delivers brought the fledgling Blaxploitation movie genre out of the indie shadows and into the mainstream. Black cinema would never be the same again.

Story-wise, we're a talking about a private dick crime flick that could have been made 30 years previously – but culturally speaking, it tackles a lot of taboos. As the title suggests, this is all about the man beneath the black poloneck rather than the adventure he embarks upon, and with our hero's relationship with a white New York police detective adding a bit of scandal and Parks throwing in a few teasing allusions to the Black Panther movement, Shaft takes more chances than most.

The passing of time may have softened the film's impact and much of the bedroom gymnastics Shaft indulges in comes across as more sleazy than groundbreaking, but at its core Shaft is a genuinely fresh attempt to mess with the traditional rules of the Hollywood crime thriller.

This new edition, with its plentiful extras that help put the film into its correct political context, is a fitting tribute.