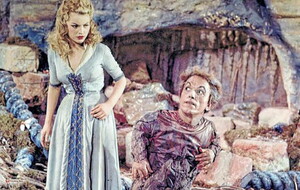 READERS of a certain vintage will likely feel a frisson of fear at the very mention of The Singing Ringing Tree.

A psychedelic journey into a nightmarish world of European fairytale and fantasy where unicorns trot around nonchalantly, fish glow fishily and oddball weirdos in pantomime bear costumes roam the land weirdly, it put the fear of God into me when children's TV screened it during the summer holidays of my youth and it still gives me the fear all these years later.

Originally filmed in East Germany in 1957 but first re-packaged for western TV consumption the following decade, as many strange Euro oddities were at the time, The Singing Ringing Tree comes over like a crazy fever dream where David Lynch has been asked to direct the Wizard Of Oz for buttons.

Laden down with Grimm fairy tale symbolism and delivered in a theatrical style that suggests an arthouse panto under the influence of Jean Cocteau, it's the kind of thing that burns itself into your brain and takes up residence in your subconscious just waiting to leap out at you when you're least expecting it.

The story – for there is one, incredibly – is about a prince who turns into a bear, a beautiful princess with lime green hair and an evil dwarf who tries to thwart the ambitions of the prince at every turn.

Those ambitions seems to amount to little more than getting hold of the fabled singing ringing tree of the title and bringing it to the princess to win her heart.

However, from such simple fables many a traumatising image can emerge, and The Singing Ringing Tree is full of unsettling sequences that haunted my dreams as a 10-year-old and continue to do so today. This is proper Grimm storytelling and every image is laced with the kind of dark morality that Disney would run a mile from both then and now.

Quite how the original production played out is hard to judge given that I'm talking about the re-structured and badly dubbed version that crossed my path in the 1970s, but the eyeball burning hue of the Technicolor stock used to film it retains its power to dazzle and the quality of the sets and costumes remain hugely impressive.

Given its origins in eastern Europe, it never tries to make any of the political points you might expect it to – but there's a dourness on display at times that suggest it could only have come from behind the Iron Curtain. That odd mix of austere and artfulness is one of the productions key attractions for me.

Directed by Francesco Stefani it's the kind of slightly unhinged and faintly subversive show that simply wouldn't get made today – or if it did manage to get funded for some strange arthouse project or other, it certainly wouldn't be broadcast to a generation of pale faced kids who've just finished their dinner and are hoping for a little light entertainment before bedtime rolls around and another day of schoolyard tedium beckons once again.

More's the pity if you ask me.