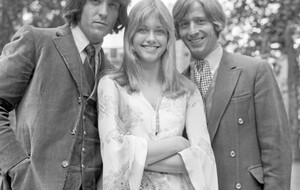 WITH the sad passing of Olivia Newton-John last week, the general line was "there was more to her than just Grease, you know". Well, if that's the case, where should a cult movie-loving fan craving a little alternative onscreen ONJ turn for satisfaction? Well, you could do a lot worse than Toomorrow for a start.

A full-blown British science fiction musical – a genre that has traditionally held very few column inches in the history of cinema reference books – from 1970, it was the creation of Harry Saltzman (one half, alongside the better known Albert 'Cubby' Broccoli, of the production team that brought James Bond to the big screen ) and TV man Don Kirshner (the puppetmaster behind The Archies) and was directed by British cult visionary Val Guest (whose films credits include everything from Quatermass to The Boys In Blue with Cannon and Ball).

A gaudily attired attempt by Kirshner to make a UK version of his own creation The Monkees – which is kind of ironic, really, given that The Monkees were a Stateside reaction to The Beatles – it's a bit of a mess really, but worth the effort for the sight of a very fresh faced Olivia singing her heart out long before John Travolta could force her into leather trews.

The story is simple and suitably psychedelic. A gang of fay students subsidise their education by forming a harmless pop group called Toomorrow. So far, so Cliff Richard, but things get decidedly odd when sonic vibrations from an instrument called a 'tonaliser', which sounds grand but is essentially a homemade synthesiser, inspires an alien being to abduct the band to perform for its fellow Alphoids who are facing extinction unless they get some "hip sounds" in their earholes, sharpish.

Olivia plays the sweet natured singer in the group and she is, as you'd expect, fantastic. The tunes she's given to perform are as limp as a week old lettuce, but she gives it her all, and while her English accent wavers a lot, her commitment and general good vibes are a real highlight throughout.

At its cheap and cheerful exploitation heart, this is a load of rubbish of course, but very 'groovy' rubbish, and great fun too, if flimsy sci-fi beat music floats your cinematic boat.

A troubled production that took over two years to complete – Olivia and the band were kept on a handsome retainer through the long periods of inactivity, apparently – Toomorrow impressed neither Krishner, who vowed to never let the film be shown in his lifetime, nor Guest, who got a court injunction that ensured it would gather dust on a shelf until he was fully paid for his contribution.

Krishner's death in 2011 allowed the world to savour the delights of the film properly for the first time. Whether it wanted to is another matter, and I'm sure Olivia Newton-John cringed whenever the film was mentioned, but that doesn't stop Toomorrow being a full-blown cult classic and a film as far removed from Grease as it's possible to imagine.