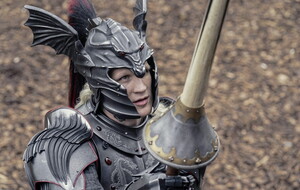 A violent altercation with her husband James (Paapa Essiedu) culminates in the abusive spouse tumbling from an upstairs neighbour's balcony.

To escape slow-motion replays in her mind's eye of James's sickening descent, Harper rents a manor house in the sleepy village of Coston.

Men is a phantasmagorical nightmare that saturates a bloodthirsty battle of the sexes with grief, psychological manipulation and toxic masculinity.

Buckley is suitably understated while Kinnear conjures distinct personalities including a lascivious clergyman, laidback publican and belligerent tyke with a passion for hide and seek.

Religious imagery suggests a modern-day fall of man but the finale's spiralling madness is open to interpretation and bewilderment.

Garland's intentions are not clear, concealed beneath layers of prosthetics and stomach-churning make-up effects that recall the bodily mutations of Brian Yuzna's gruesome 1989 satire Society.

House Of The Dragon: Matt Smith as Daemon Targaryen

HOUSE OF THE DRAGON (10 episodes, streaming from August 22 exclusively on Now, Fantasy/Adventure/Romance)

OVER the course of eight seasons, fantasy drama Game Of Thrones became one of the most critically adored and popular series on television.

The show won 59 Emmy awards including four trophies for Peter Dinklage as Best Supporting Actor for his role as Tyrion Lannister.

More than three years after the contentious final episode The Iron Throne, which determined who would finally rule the kingdom of Westeros, the eagerly awaited prequel House Of The Dragon begins its reign on Sky Atlantic and streams exclusively on Now.

Based on George RR Martin's novel Fire & Blood, the 10-part series chronicles the turbulent history of House Targaryen 200 years before the events of Game Of Thrones.

Otto Hightower (Rhys Ifans) and his daughter Alicent (Olivia Cooke) loyally serve the king but they fear Daemon and the ramifications if he ascends to power.

Viserys's cousin and accomplished dragonrider Princess Rhaenys Targaryen (Eve Best) should perhaps have inherited the throne but the Great Council rejected her claim because of her gender.

Any bitterness she may harbour could be shared by her husband, famed nautical adventurer Lord Corlys Velaryon (Steve Toussaint) known as "The Sea Snake".