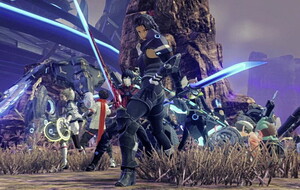 WELL into its fifth year, the Switch keeps proving there's life in Nintendo's old dog. And while we approach a season of mellow fruitfulness – with big-hitters Bayonetta 3 and Splatoon 3 on the horizon – Xenoblade reminds us that, as a Japanese company, Nintendo hasn't forgotten the hardcore adventurer, whose idea of a good time involves big-eyed anime heroes and plots well-nigh impenetrable to the casual gamer.

For the 2010 Wii original, industry vet Tetsuya Takahashi returned the Japanese RPG to its 90s pomp. And though its sequel upped the ante, being a Wii U game meant there were less at the Last Supper than actually played it.

Third time's the charm, though – bringing Xenoblade's oak-aged pedigree to a mainstream console for interstellar larks that'll keep the keep the dust from settling on your Switch.

The setting this time around is Aionios, a world where two kingdoms are locked in an eternal war, fought by pre-teens with 10-year life-spans spat out of birthing vats. Yes, it's Japanese RPG capery at its finest.

When two opposing squads are thrown together as outsiders, they embark on a long quest to change the world. How long? Try a 90-hour skim-through, and double that to unearth its every secret. Hell, at 10 hours, the tutorial alone lasts longer than many full-price releases.

With a huge space to explore, landmark-pocked vistas abound, boasting lashings of side quests and a day-night cycle that reveals unique enemies. Eventually handed free reign to poke around at your own pace, trekking Xenoblade's vast acreage provides the adventure, but it's in combat where the thrills are at.

While our main boy Noah is handy with a blade (and, erm, a fancy flute to honour the fallen), you'll end up with at least six party members on the battlefield at any given time, targetting enemies to auto-attack while the player deploys special Arts abilities.

Xenoblade is a series traditionally bad at explaining its combat mechanics, and part three is no exception – though it rarely seems to matter as you kick butt and ask questions later.

Pushing the ageing Switch hardware to its limit, what the developers coax from Nintendo's creaking console is tantamount to geriatric abuse, coupled with top-drawer Thesping and a sweeping score from veteran composer Yasunori Matsuda.

With an immense world to explore and confounding systems to master, perseverance is required in a game that won't be everyone's cup of tea – especially if you bought your Switch to stomp turtles or 'catch 'em all'.

But for those with a hankering for murky anime delights, Xenoblade offers outstanding Oriental tomfoolery that'll keep the cold sweats of adventure fans at bay while they wait for the next Zelda epic.