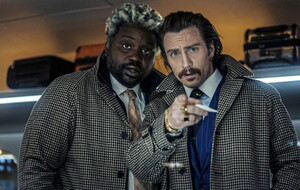 Brian Tyree Henry as Lemon and Aaron Taylor-Johnson as Tangerine

LAUNCHED in 1964 to coincide with the Summer Olympic Games in Tokyo, the Shinkansen or bullet train has become an enduring symbol of sleek, efficient Japanese design, accelerating to operating speeds approaching 200mph on high-speed railway lines that snake across the islands.

"Let this be a lesson in the toxicity of anger," growls Brad Pitt's circumspect hit man, channelling the deadpan, dudeish energy of The Big Lebowski with flowing golden locks to match as co-stars perish around him.

The rough and tumble is fitfully entertaining, enlivened by a running joke about Thomas The Tank Engine that allows Aaron Taylor-Johnson to revisit his Liverpudlian accent from Nowhere Boy.

However, over the course of two hours, the hyperkinetic mayhem is exhausting, exacerbated by a fragmented chronology that zigzags between back stories and forcibly interconnects thinly sketched characters as tiny cogs in an elaborate cause-and-effect plot.

On the few occasions that Leitch indulges slow-motion during a melee, he fetishises swordplay or mines humour from bruised passengers flying helplessly through the air, colliding with luggage and airborne contents of a catering trolley.

Our refreshments are a couple of tongue-in-cheek cameos and Pitt's laidback luminosity.

He portrays notoriously unlucky American assassin Ladybug, who is keen to return to the killing game.

Ladybug's handler Maria (Sandra Bullock) eases him back into the job with a simple mission: retrieve a metal briefcase on a high-speed train departing from Tokyo.

Ladybug acquires the asset but as he observes, the pick-up is too easy.

Killers for hire including the twins Tangerine (Aaron Taylor-Johnson) and Lemon (Brian Tyree Henry), The Wolf (Bad Bunny), The Prince (Joey King) and The Hornet (Zazie Beetz) are also on board with diabolical motives linked to the same briefcase and a shadowy kingpin called The White Death (Michael Shannon).

One venomous stolen snake and a vengeful father (Andrew Koji), whose young son is in hospital after a near-fatal tumble from a roof, become entangled in the bedlam as bullets, knives and other weaponry arc through blood-smeared carriages.

Bullet Train plays to conductor Leitch's strengths as a stunt coordinator and performer, exploiting every nook and cranny inside an increasingly wrecked Shinkansen as prop-laden backdrops to the frenzied fisticuffs.

Pitt oozes indestructibility from an opening strut down a neon-lit street while Taylor-Johnson and Tyree Henry are an effervescent double-act (the latter's wavering cockney accent operates to its own timetable.)

Our ticket to ride on this express service takes us in dizzying circles with nowhere to sit quietly and draw breath.