Jenny Lee puts performers and artists on the spot about what really matters to them. This week, novelist Cathy Kelly 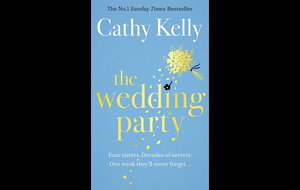 Cathy Kelly's latest novel The Wedding Party is a heartwarming story about sisterhood, love and friendship

I can't recall when I wasn't thinking about storytelling. I told stories to my darling dog and then my little sister and finally, I began to write them down. There was lots of bad poetry in the teenage years.

George Michael on his comeback tour in Dublin. Simply the best ever. My heart breaks to think of poor George and his gentle spirit. David Bowie at Slane in 1987. I have been a Bowie fan since I was 15. And Neil Diamond. I saw him in what they called 'the round' in what was then The Point in Dublin about 20 years ago and ended up having dinner with him and his team in a restaurant. It was a bit surreal.

Like most of the huge stars I have ever come into contact with, he was a gentleman. I have zero time for famous people who think they are better than normal humans. All people are special and precious.

Nile Rogers from Chic. I keep missing him when he plays – the man is a genius.

Impossible. I adore music and run between Bizet's Carmen, Nina Simone singing anything, a bit of the Stones and anything R&B. And Nile, natch.

Some Like It Hot, Kung Fu Panda and Aliens. I love Ripley in her singlet with the flamethrower, going to fight Mama Alien to get Newt back. Mama Ripley takes no prisoners. She's a doer – I really identify with that.

As someone who works creatively, I find naming things as 'worst' is cruel. As a former film critic and a person who tells stories, I have a very short attention span for films that don't work. I hit the off button after 15 minutes.

My darling friend Marian Keyes, US novelist and non-fiction writer Annie Lamott and Jilly Cooper. She always has the power to cheer me up. She writes with such warmth, even if she writes about worlds I don't know.

I love watching athletics, gymnastics and show jumping. I take a liking to someone from some mad country and root for them if there's nobody I know there.

Myself and my granny used to watch The Dublin Horse Show on her old telly in the west of Ireland during the summer and as someone who wasn't a TV person, this was something she'd put on. It was great fun. We had an unbroken pony we rode without a saddle so I couldn't exactly compare, but I loved horses. We were experts at yelling 'four faults'.

I have a yearning for Morocco right now…

Unkindness, rudeness and people who walk by someone sitting on the street begging. Nobody wants to be there. A kind word matters.

Dinner? I had homemade pasta with a tomato and nutty sauce recently. No clue what it was called – delicious.

Dessert? Fresh fruit and Ben and Jerry's vegan ice cream. I am not a vegan, but I have trouble with dairy. This stuff is magic.

Ella Griffin and we know each other through writing. We text every day. She is a brilliant writer and a darling friend.

I think there's a divinity and what form that takes – whether it is all the goodness in people whirling round the world or whether there is a glorious force for good, I don't know. I believe in inherent goodness.

I think religion has moved away from any sense of 'love thy fellow humans'. Religion has caused more wars and pain in the world than anything else. Religion means small girls undergo female genital mutilation. Religion means one community fights the other to the death. Religion generally puts women in second place and power in first place.

:: Cathy Kelly's latest novel, The Wedding Party is published by Orion Press and is out now.