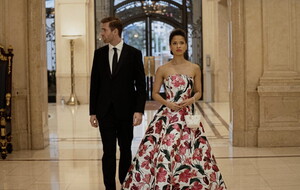 Surface: Oliver Jackson-Cohen as James and Gugu Mbatha-Raw as Sophie

BUZZ Lightyear (voiced by Chris Evans) and commanding officer Alisha Hawthorne (Uzo Aduba) crash-land their spaceship with a manifest of 1,200 slumbering passengers on a planet with aggressively hostile insectoids and vegetation.

Marooned 4.2 million light years from home, the Space Rangers reanimate crew and passengers to construct a fortified base from which to launch test flights of an experimental jet piloted by Buzz.

Unfortunately, time dilation dictates that for every minute Buzz spends travelling at hyperspeed, the people back at base age one year.

In their way stands Emperor Zurg and an army of mechanised monstrosities.

Billed as the film which persuaded six-year-old Andy to ask for a Buzz Lightyear action figure as a birthday present in the first Toy Story film, director Angus MacLane's out-of-this-world computer-animated adventure shoots for infinity and beyond but cannot escape the gravitational pull of high expectations.

I confess that I wept like a leaky tap.

Visuals are breathtaking and feline Sox is a bountiful source of humour but Lightyear is one of Pixar's fluffier and more forgettable offerings.

Compared with the thrilling earthbound escapades of Andy's Buzz Lightyear figure over the past 25 years, child's play comfortably wins out over intergalactic survival.

THE truth is malleable in this eight-episode psychological thriller created by Veronica West, starring Oxford-born Gugu Mbatha-Raw as the victim of a traumatic head injury.

Sophie (Mbatha-Raw) lives in San Francisco with her husband James (Oliver Jackson-Cohen), who is helping her relish a fresh start at marital bliss following a failed suicide bid.

Blighted with extreme memory loss, Sophie initially accepts the harrowing truth about her attempt to take her life by jumping off a ferry.

"If my life was so perfect, why did I try to end it?" she muses, niggled by details that don't quite add up.

Against the advice of her therapist (Marianne Jean-Baptiste), Sophie embarks on a quest to understand what really happened in the days leading up to the ferry incident and did she jump… or was she pushed?

The first three episodes surface this week and the mystery deepens on subsequent Fridays.