Author and historian Cormac Moore explains why, despite Michael Collins' clear passion for securing the future of the north in the wake of partition, his often ill-judged and counter-productive strategies ultimately prolonged the plight of northern nationalists and indeed partition itself... 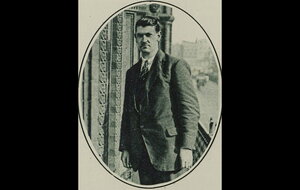 ONE-HUNDRED years ago, in August 1922, Michael was shot and killed in Béal na Bláth in west Cork at just 31-years-of-age. His was the most high-profile death of the Irish civil war which had major ramifications for both jurisdictions on the island.

Seamus Woods, the officer commanding the 3rd northern battalion of the IRA in Belfast, claimed, "Of all the Dublin government ministers, Collins had been most deeply concerned about the fate of northern Catholics".

While it is true that Collins, compared to his government colleagues, appeared to demonstrate the most interest in the plight of northern nationalists in 1922 and of ending partition, his strategies (if in some cases they could be even called that) on the north were confusing, contradictory, and often counter-productive.

Before the signing of the Anglo-Irish Treaty in December 1921, Collins shared the naive views of Éamon de Valera and Arthur Griffith to over-emphasise the blame attributed to Britain for causing partition and downplay the real hostility of Ulster unionists to being governed by a Dublin parliament.

Collins maintained that 'the tendency of sentiment in the north-east, when not interfered with … was national, and in favour of freedom and unity'.

He still was pragmatic enough to know of Sinn Féin's weakness in the north-east and for the 1918 general election proposed a compromise brokered by the Catholic primate of All Ireland Cardinal Michael Logue for Sinn Féin to withdraw four candidates in Ulster constituencies in return for the Irish Parliamentary Party to do likewise in four others, so as to maximise the nationalist seat return.

He was in favour of contesting the first election to the Northern Ireland parliament in 1921 so long as Sinn Féin abstained from taking its seats. He expected Sinn Féin to win between 13 and 14 seats in the election. As it transpired, only six were won by Sinn Féin, he himself being one of the six elected, in South Armagh.

He believed in rigorously pursuing the Belfast Boycott as a means to end partition, another naive policy that arguably increased the likelihood of permanent partition instead of ending it.

It was Collins, along with Griffith, who led the Treaty negotiations which resulted in a boundary commission to determine the size of the northern jurisdiction if Northern Ireland decided to opt-out of the Irish Free State.

He agreed to sign the Treaty after being convinced by the British prime minister David George that large parts of Northern Ireland would be transferred to the Free State, leaving the remainder an unviable rump. He, like the rest of the plenipotentiaries and much of nationalist Ireland, was guilty of accepting such an ambiguous clause, which ultimately resulted in the boundary remaining as it was, as it still is today.

While heralding the boundary commission as a game-changer in the weeks that followed the Treaty, Collins was quick in agreeing to its terms being fundamentally altered in January 1922 with his first of two pacts with the Northern Ireland prime minister James Craig.

He agreed with Craig for them to deal with the question of the boundaries without help or interference from any British authority, and to nominate representatives reporting to Collins and Craig directly with a view to 'mutually agreed' borders. Their agreement on the boundary was even more vague than Article 12 of the Treaty.

The main conclusion Collins drew from the conference, another wholly naive conclusion, had been "that north and south will settle outstanding differences between themselves. We have eliminated the English interference".

This was one example of many of Collins making quick decisions without consulting anyone. Northern nationalists were much perturbed by this decision, rightly believing it provided Craig with a veto to oppose any changes to the border. As it transpired, the pact was broken within days, as the second pact of March 1922 would also be.

As chairman of the provisional government of the Free State, Collins was now considered the spokesperson for northern nationalists, at least by the British. He was under enormous pressure from many different groups who sought different answers from Collins on how to deal with the ever-growing fraught situation in the north.

On top of Ulster unionists and the British government pressing him, Collins had to deal with the split within Sinn Féin and the IRA with circumstances spiralling towards civil war, as well as the different outlooks within northern nationalism on how best to deal with partition.

While some nationalists believed the best course of action was to use the northern institutions for the betterment of nationalists, Collins believed it was essential to continue with the non-recognition of the northern parliament, "otherwise they would have nothing to bargain with Sir James Craig".

He oversaw the financing of the salaries of teachers and school managers who refused to recognise the northern educational ministry. He also sought to destabilise the northern jurisdiction by other means, mainly through the arming of the IRA for engagements in the north.

Collins established an Ulster Council in early January 1922 to coordinate IRA activity in the six counties and along the border. He also established the Belfast City Guard to comprise of men from the Belfast IRA Brigade to run all IRA operations in Belfast during 1922.

Frustrated at political and propaganda efforts to reach a solution on the north in the first three months of 1922, Collins opted for an exclusively military solution via the disastrous May offensive which perfectly encapsulated Collins's muddled thinking on the north. As the man who spearheaded it, what exactly he hoped to achieve by the offensive remains unclear to this day.

His erratic policies on the north were coming under increased scrutiny from his provisional government colleagues. Even before he was killed in August 1922, the cabinet resolved earlier that month to end its non-recognition campaign. Spearheaded by Ernest Blythe, a new policy prevailed to recognise the northern government and to discontinue the obstructionist policies.

While it is true that Collins cared deeply about the plight of northern nationalists and, had he survived, it is unlikely that the acute sense of abandonment they subsequently felt would have prevailed; for all his passion and interest in the north, his bizarre, contradictory, and often counter-productive strategies ultimately proved fruitless in helping northern nationalists, let alone ending partition.

:: Cormac Moore is author of Birth of the Border: The Impact of Partition in Ireland (Merrion Press, 2019).