What do you get if you cross The Irish Rover with Merry Christmas Everybody? The answer is a unique Christmas stage show that celebrates Ireland and gets everyone in a festive mood. Jenny Lee finds out more from Fairytale of New York creator Ged Graham... 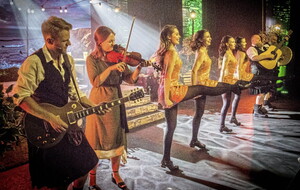 The cast of Fairytale of New York

IT MAY only be August, but it's time to start planning your Christmas festivities – and Fairytale of New York promises a "night full of festive fun and Irish craic" when it makes its Irish debut this December.

From the producers of Ireland's Call and Seven Drunken Nights – The Story of The Dubliners, the show features an international cast of singers, musicians and dancers offering favourite Christmas songs including Last Christmas, I Wish It Could Be Christmas Every Day, Merry Christmas Everybody, All I Want For Christmas Is You, Let It Snow – and, of course, the titular classic Fairytale of New York.

But also included in the mix will be some of the greatest Irish sing-along songs of all time including The Galway Girl, The Irish Rover, Wagon Wheel, Dirty Old Town and The Black Velvet Band.

This fusion of Irish and Christmas anthems is the brainchild of creator and co-producer Ged Graham, who also stars in the show.

Born in Dublin, Ged moved to Manchester when he was 10-years-old, but has clung tight to his Irish roots, living within a very ex-pat community and bringing his children up playing GAA and doing Irish dancing.

"I think you are more aware of your Irish roots when you move away. You feel more connected with Ireland, because you are away from home," says Ged, who has kept his thick Dublin accent.

"We had done all the pantos and we have been to the Christmas concerts where bands play their Christmas music, and I just thought that we could do something a bit better.

"So I wanted to create a family show in the spirit of St Patrick's Day, but that had a Christmas vibe to it. And just like Saint Patrick's Day, what we are finding is that you don't have to be Irish to celebrate."

The key to the show was creating distinctive Celtic arrangements for all the traditional Christmas hits.

"We spent a lot of time and effort looking at the songs and working out how we could give those Christmas anthems a bit of lilt to make them have an Irish feel, and yet be still recognisable," explains Ged.

"It's great to hear something like Driving Home For Christmas played in an Irish-Celtic way, rather than the Chris Rea version of it."

Ged describes Fairytale of New York as being "between a story and a concert". With a message of 'coming home for Christmas', each song is staged in a different way.

Last winter, the show debuted with a British tour including a date in London's West End. Covid restrictions meant it wasn't able to travel, but this year they are delighted to be playing five Irish dates; and there is a larger cast and set.

"Production values have greatly increased this year. We are creating a winter wonderland village in Central Park, New York. It's got lots of foliage, lights, Christmas trees and a German market.

"We immediately want to create that festive atmosphere through the set and Christmas songs playing, so that when audiences come into the theatre before the show they immediately feel transported to a Christmas setting and they anticipate a great night.

"The opening number is an original song we wrote for the show called Ireland I'm Coming Home. It's a big uplifting anthem which has got a great big Irish dancing part in the middle.

"It's a real show-starter opening and then you're into the Christmas songs. We just want people to enjoy themselves."

And it wouldn't be an Irish show without an Irish pub: "It's been a bit of a challenge making that work on stage, but it really adds to the atmosphere. In the show I play a grandad and have a bit of banter in there with my grandson," says Ged.

Is it modelled on any particular Irish bar?

"My favourite pub is O'Donoghue's in Dublin. I've been going in there for 40 years on and off and always end up there every time I'm back home."

At one point during the show, the cast are sitting around the piano having a sing-along, complete with Christmas hats. I can't help but ask Ged about his Santa-like appearance.

"I get compared to Santa all year round. I've had the beard for 10 years now and it's served me well and been a huge benefit to my career," laughs Ged, who also this autumn opens his Carole –The Music of Carole King musical and takes Seven Drunken Nights on tour to Scandinavia.