Games: Stray will have players hooked on a feline 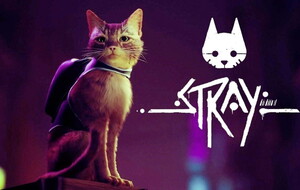 Stray is the cat’s pyjamas

I'M NOT a cat person, and fail to see the appeal in a mangy ball of histamine with a backside that looks like an asterisk. But the star of Annapurna's latest – a brilliantly realised kitty who roams a gritty, post-apocalyptic city – has won me over.

The kind of lush single player yarn that used to dominate gaming, Stray is the cat's pyjamas.

Separated from the pack, our orange furball finds itself trapped in a dystopian world populated by a community of robots who go through the motions of life and dream of seeing the world outside their walls again. Relics of a once human population, these galumphing automatons drink, shoot pool and play music, all the while fearing a roving scourge of cycloptic bugs.

Despite the bleak setting, this isn't The Last of Puss, with a light touch and real warmth to its emoji-faced droids. With scarily accurate animations, every mewl and twitch of the ear is brilliantly realised as you do whatever a cat does – from scratching furniture and walls, knocking objects off ledges and getting your head caught in paper bags.

Pretty soon, though, players find themselves on a quest to free the bots alongside your bug-eyed companion, B-12, a drone who can communicate for you. Gentle fetch quests call on your feline acrobatics, with much clambering on pipes, ledges and rooftops. And while the light puzzling isn't exactly full of stumpers, there's enough here to give players paws for thought. There's some brilliant world-building at play here, with plenty of characters to interact with (including the mopey town robo-drunk, called, erm, Seamus).

The stress-free adventuring, with our kitty hopping daintily over obstacles and solving rudimentary puzzles, is enlivened by sequences where our marvellous moggy tries to dodge or outwit evolved bacteria called Zurks. These chittering critters hope to snuff out your nine lives, but can be coaxed towards traps and even popped with a light gun.

Later levels are dominated by stealth sections where you outwit security drones out to catch that darn cat. The developers promised a lush solo adventure, and they weren't kitten around. Stray is as polished as it is unique, and already a contender for game of the year.

Even if it can be polished off in around six hours, there isn't an inch of fat on its bones. And with an ending that'll linger long after the credits have rolled, Stray will have players hooked on a feline.