As award-winning musical Blood Brothers returns to Belfast next month, we catch up with former X Factor finalist Niki Evans who is playing the iconic role of Mrs Johnstone in the production for the first time in 10 years... 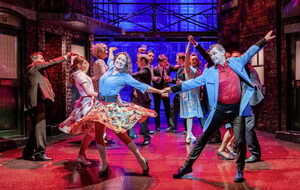 WILLY Russell's legendary musical tells the captivating and moving tale of twins separated at birth, who grow up on opposite sides of the tracks, only to meet again with tragic consequences.

Former X Factor contender Niki Evans returns to the iconic role of Mrs Johnstone for the latest UK and Ireland tour and reveals how she is relishing stepping back into the role.

:: When did you last play Mrs Johnstone and how is it returning to the show?

I last played her in 2012 and returning to it was scary at first. The first time I did it I'd never done a musical or been a part of the theatre world, so when producer Bill Kenwright called me I think I turned it down four times.

He eventually persuaded me to audition and within a week I was on stage in the Phoenix Theatre. It was such a whirlwind.

Since then, I've done lots of other roles, mainly funny ones, so to come back to such a dramatic role is very scary but it's like a dream come true. They'd asked me to come back before but I had to be ready, and now I am.

:: What makes her such an iconic musical theatre role?

It's because of her strength and the emotions you have to go through when you're on stage. She starts as a young girl in her 20s, then within 20 minutes she's got seven kids and has to give one away.

She's a strong female lead and she's so real. Every mother must see something in Mrs Johnstone that they've also gone through. I know I can. I've got two sons, so her Micky and Eddie are my Morgan and Jonah. My kids have had troubles, I've had troubles, and the way I look at it is: I don't have to play her, I just have to be her.

:: Are you discovering new things about her and the show this time round?

Yes, she's not such a feisty tiger as I thought when I first did the show. They used to call me 'The Feisty Tiger Mrs Johnstone'. I come from a family of four, we grew up on a council estate, we had no money, I used to go to school in jelly shoes even in November, and my mum was a tough cookie. You didn't mess with her and that's how I thought Mrs J was, or at least that she was how I was.

But now I'm older I've mellowed. I'm 50 now and I'm not so bouncy as I was 10 years ago, so my take on her is much more grounded. She's stronger without being quite so feisty.

:: It's such an emotional rollercoaster for the audience. Is it the same for you as a performer?

It is, yes. There are a couple of parts in the show, without giving spoilers, where it rips me to shreds. I do it as though someone is about to take one of my children and I can't hold back. I have to feel it every time I do it.

:: Was performing something you always wanted to do?

Singing was always my passion as soon as I could open my mouth. It's like breathing to me, it's so natural for me to do, but the actual performing scares the pants off me. I was always happy as a backing singer or in the studio where nobody is looking at me. I know that sounds really weird but when I'm out there I have to forget there's people watching because it's terrifying.

Completely. It's given me a career I didn't think I was capable of, although it did eventually break up my marriage because I was never there.

My life since X Factor couldn't be more different. My kids didn't even know I sang because I'd given it up. So much has happened in the past 15 years career-wise and I've got a partner and I'm getting married soon, which is very exciting.

:: You've done lots of musical theatre. Apart from Blood Brothers, what have been your other favourite jobs?

There are loads and I've loved every character I've played, but if I had to pick one it would be Paulette in Legally Blonde. To go from playing Mrs Johnstone to Paulette in just two weeks was brilliant because it was such a contrast. I've never laughed and smiled so much as I have doing the bend and snap. It was the first time I realised I could make people laugh as well as cry.