Belfast ex-punk's tribute to Shane MacGowan's smile 'not a teetotal song, that's for sure'

Shane MacGowan has a smile that only a mother could love yet Belfast-born musician Paul Burgess has penned a song in tribute to his toothy grin. He tells Joanne Sweeney about the drunken time in Dublin that inspired the tune Writer, lecturer and former punk musician Thomas Paul Burgess, who has written a song in tribute to Shane MacGowan

AS BREAKFAST goes, drinking rum and port is not for the faint-hearted but when you are in the company of Shane MacGowan, then anything can happen.

You had to be there, as they say, and ex-Belfast punk musician and now university academic Paul Burgess was there that morning in Dublin over 30 years ago.

To mark the recent 60th birthday of the legendary Pogues' front man, Burgess has written a rousing ballad called Shane McGowan's Smile that's sure to go down well with drinkers and music lovers alike.

Thomas Paul Burgess, as he's calls himself creatively to distinguish from Paul Burgess, the former drummer of 70s band 10cc, was a drummer and songwriter in the punk band Ruefrex when the breakfast meeting between himself and MacGowan occurred in 1985.

The Pogues were label mates with Ruefrex on Stiff Records; they had just burst on to the scene with their Red Roses For Me album and were about to release the brilliant Rum Sodomy & The Lash LP.

Paul's band had toured England as support to The Pogues and were booked to appear on a Saturday morning children's programme on RTE when they met up.

"I pitched up in Dublin at an early hour only to see Shane arrive with a couple of minders. He was the worse for wear and had a bottle of port in one hand and a bottle of rum in the other. Both were open and he was slugging from one at a time,” recalls Paul.

"This was not unusual for Shane at the time but I know that he has recanted on all that [drinking] now. But not everyone had Shane's constitution and he was looking to me to join in on this before we were interviewed. I didn't have that constitution. Maybe if we had a thrown some cornflakes into it, we could have called it breakfast."

While Paul did take a drink, so as not to offend MacGowan, what happens next is told in the third verse of the song: "I don't wish to be haughty, seem stuck up or proud, but his teeth and his clobbers have rendered me cowed".

MacGowan turned 60 on Christmas Day last year and was awarded a lifetime achievement award on January 15 at a star-studded concert in Dublin's National Concert Hall. It was attended by stars including Bono, Sinead O'Connor and Nick Cave, actor Johnny Depp and President Michael D Higgins.

MacGowan's health has not been good since he injured himself a few years ago. He briefly appeared on stage in a wheelchair to join Cave for a duet before performing a solo version of Will Ye Go Lassie Go.

Paul sent a copy of the song to MacGowan's management before it was released and believes it has been received well and in the spirit that it was intended.

"Shane MacGowan’s Smile is a real sing-along, sway from side to side type of song and the video that we shot in the Crown Bar in Belfast reflects that as well. As the main protagonist was known for his Herculean abilities in the drinking front, it's not a teetotal song, that's for sure,” Paul says.

He recorded the single with his band Sacred Heart of Bontempi, which includes Keith McVeigh, also of Shock Treatment and Peacefrog, Niall Lynch, Johnny Vance and Donal McCann. The single was recorded by Gary Aiken and mixed by Mick Glossop, well known for his work with Van Morrison, among many others.

When Paul is not recording or performing music, he's also a successful academic writer and novelist.

Originally from the Shankill Road in Belfast, he has been living in Cork for more than 20 years where he is known as Dr Burgess, senior lecturer in Applied Social Studies at UCC.

His second novel, Through Hollow Lands (Urbane Press), is due out in July and has been praised by Bangor writer Colin Bateman as being, "Like Brian Moore given a make-over by James Elroy. Excellent stuff."

:: Shane MacGowan’s Smile has been released on Espresso Records via Kudos Distribution worldwide on streaming and download services. 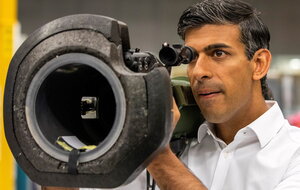