This tale of a 15th century girl imbued with a religious passion or psychological obsession taking on the executive remains topical. Picture by Steffan Hill

IT'S an old reviewer's dictum that if you discuss the set over-much, the production can't have been terribly good. Yet with the new production of George Bernard Shaw's St Joan that has just opened at the Lyric Theatre, you can't avoid commenting on Grace Smart's innovative set.

Looking like a smarter version of the decor of The Office, this 21st century assembly of water cooler, desks, PCs and a bleakly ironic Fire Point sign underlined the 1922 drama's relevance while sometimes confusing the action.

What's undeniable is that this tale of a 15th century girl imbued with a religious passion or psychological obsession taking on the executive remains topical. The opening scenes were slightly hesitant as a suited Lord (Alan McKee), speaking early 20th century Shavian prose and dealing with medieval politics, used speakerphone. The scene was set, though, and Joan, the Maid of Orleans, who came on in a beanie and ripped jeans, charmed everyone.

You can forget how wordy Shaw is and Philip O'Sullivan, who adapted the play, says he cut an hour and a half out. He's done a good job and the second half flowed beautifully and dramatically, taking us from the Maid's triumphant achievement in crowning the Dauphin (a deliciously camp turn from Kevin Trainor) to her capture, eventual excommunication and death at the stake.

The court scene in which Joan's tormentors try to save her but end up delivering her to the machinations of the evil English, personified by an urbane executor played to perfection by Tony Flynn, was harrowing. It played like an early run of The Crucible, with snippets of Anouilh's Antigone.

Michael Holroyd described St Joan as a "tragedy without villains". Maybe, although one candidate would be De Stogumber. This tortured, sadistic accuser was delivered with brilliant physicality by Rory Nolan.

Jimmy Fay directed and one line among many good Shavian observations sums it up. The Inquisitor (Philip O'Sullivan) says when they have sentenced the Maid that she's a young and innocent creature crushed between the Church and the law. Ultimately, as Shaw also notes, even though we hear Joan made a good death, God seems to be on the side of the big battalions. 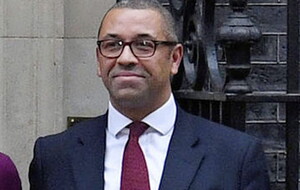